Vibration Based Damage Detections of Scour in Coastal Bridges

ABSTRACT:
The ability to ensure the resiliency and to predict the future performance of coastal bridges is very dependent on identifying damages in critical components of the bridge rapidly after an event. Traditional vibration based damage detection efforts focused mainly on the detection of fatigue cracking. Although detecting fatigue cracking is important, it does not contribute significantly to the total number of bridge failures in the United States. A critical review of the up-to-date literature showed that hydraulic loading, including scour, is responsible for about 50% of the failed bridges. To this end, the primary focus of this project is the development and evaluation of damage features capable of rapidly identifying and quantifying the extent of deterioration of critical coastal bridge structures due to scour at submerged piers following extreme storm events. This paper illustrates the use of the curvature of horizontal mode shapes and introduces the “Modified Curvature Damage Factor.”

In its latest report, the National Bridge Inventory revealed that 603,168 bridges currently exist in the United States.1 The Federal Highway Administration (FHWA) rated 25 percent of these bridges as “deficient.” The American Association of State Highway and Transportation Officials (AASHTO) announced in their 2009 Bottom Line Report that 50 percent of US bridges are more than forty years old without sufficient information on their current condition.2 And although these represent 50 percent of the bridges, they are responsible for 80 percent of structural deficiencies and about 75 percent of total deficiencies.

Further, the visual inspection of bridges regulated by the FHWA has limited capabilities in detecting all possible damages in bridges and there is the potential to miss damage that appears between inspection intervals. Based on the current condition of bridges, the need for global damage detection methods that can be applied to complex structures has led to the development of methods that examine changes in the vibration characteristics of the structure.

The primary objective of this research is to develop and evaluate a rapid vibration-based damage detection (VBDD) technique capable of evaluating the condition of a bridge following an extreme hydro-meteorological event. This technique relies on the effect of scour at submerged piers on the response of the bridge superstructure without any underwater instrumentation.

Extreme natural hazards, particularly hydro-meteorological disasters, are emerging as a cause of major concern in coastal regions. From a structural point of view, hydraulic loading due to flood and scour is responsible for about 50 percent of the failed bridges in the United States.4 Scour failures tend to occur suddenly and without prior warning or signs of distress to the structure. The nature of the failure may lead to collapse of the bridge. During floods, the flowing water tends to excavate pits in front of the submerged bridge piers. As the velocity of floodwater decreases, the suspended sediments precipitate and fill the excavated pits. Consequently, following inspections and measures cannot furnish indications on the maximum depth reached by erosion during flood.5 Moreover, the suspended sediments that fill the excavated pits do not provide good confinement for the pile since they are not as compacted as the rest of the soil. Therefore, rapidly assessing the condition of bridges after an event will inform the decision making process in the context of assessing evacuation and first responders’ routes. It should be mentioned that, after meeting with NCDOT Division 3 maintenance engineers, the most reliable way to measure the level of scour is by underwater investigation using divers. Further, underwater investigations are performed once every four years, or when a bridge is overtopped.

VBDD techniques have shown success in detecting several types of damage, such as fatigue cracking in steel beams. Since the primary objective of this research is to develop a damage detection framework capable of rapidly detecting critical damage of the superstructure as well as scour, VBDD techniques were selected to study their sensitivity for detecting scour. For this investigation, an idealized structure representing a two-span continuous bridge was selected. A schematic of the idealized structure is shown in Figure 1. This steel grid was investigated previously by Catbas and others to study the potential of two different damage-sensitive features for damage detection.6 A finite element (FE) model was created and verified by the experimental results of Catbas, et al. After verification of the modal analysis, the model was modified to simulate an idealized coastal bridge, where the intermediate piles were modeled. The abutments at each end were idealized with simple pin and roller supports. Six FE models were created. The first model represented the reference case and the other five models simulated five different levels of scour. Scour was modeled as an increase in the unsupported height of the intermediate piles.

Figure 1. Schematic of the Test Specimen7

where N is the total number of modes to be considered, νo” is the curvature mode shape of the reference structure and νd” is that of the damaged structure.8 By calculating the CDF for the first five horizontally displaced mode shapes, the location of damage at the intermediate support was captured. However, as shown in Figure 2a, the CDF also identified four potential false positives. This may be attributed to the high order mode shapes that do not contribute in the damage identification. A threshold is typically used, based on a statistical analysis of the CDF values, to discriminate between the true locations of damage and false positives, as given by the horizontal lines in Figure 2. To normalize the effect of the higher order mode shapes, a Modified Curvature Damage Factor (MCDF) was introduced as follows

where the MCDF calculates the average of the absolute ratio of the curvature change for a certain number of mode shapes. From Figure 2b, the MCDF clearly identified the location of scour. 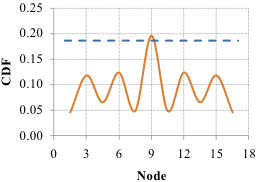 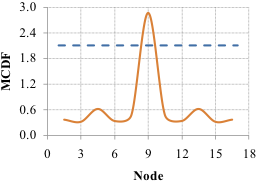 Figure 2. (a) CDF and (b) MCDF for the Idealized Structure at 40 inches of Scour. 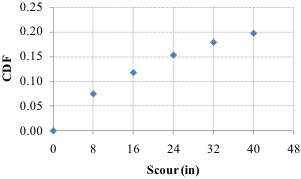 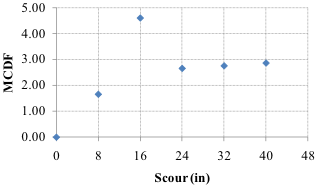 Figure 3. (a) CDF and (b) MCDF Calculated at Different Scour Levels

Benefits of the Research Products

The end users of the technologies that will ultimately result from this research project will be technical in nature such as local/state bridge engineers or engineering consultants. It is anticipated that once the outcomes of this research project are successfully demonstrated in field applications that “plug-and-play black box” instrumentation packages will be developed and manufactured by others for this application. These kits would automatically collect and manipulate the raw data so that the prediction of the remaining strength or endurance is possible. The output of which will be used to inform agencies such as the Federal Emergency Management Agency (FEMA) to make informal decisions regarding relief efforts. Further, the developed framework can serve as a template for other critical infrastructure enhancing the resilience of communities.

The main difference between the investigated idealized structure and a real bridge is the presence of a concrete deck. To study the effect of the stiffness of the concrete deck on the horizontally displaced mode shapes for the detection of scour, a FE model for the Chicken Road Bridge in Lumberton, NC, was created. The FE model was verified by experimental work performed by previous researchers.9 After verification, three more FE models were created to simulate three different levels of scour. The differences in mode shape curvatures were calculated for the horizontally displaced mode shapes. It should be mentioned that the FE results showed the same conclusions as the idealized structure models.

Having verified the proposed technique numerically, on-going efforts are dedicated to laboratory testing of an idealized structure (similar to that shown in Figure 1) and preparations for long-term field applications in collaboration with NCDOT Division 3 engineers. These tests will be used to evaluate the robustness of the technique allowing for the complexities, such as environmental conditions, not easily accounted for in numerical simulations.

Based on the findings of the current study, the following conclusions may be drawn:

About The Lead Author

Adel H. Elsaid is a PhD student working as a research assistant in the Department of Civil, Construction, and Environmental Engineering at North Carolina State University (NCSU). He received his bachelor (2003) and master (2007) degrees in structural engineering from Ain Shams University, Cairo, Egypt. He worked as a professional structural engineer in a consulting firm from 2003 to 2008 until he joined NCSU to pursue his PhD degree. He has published one journal paper and two conference papers. He may be contacted at ahelsaid@ncsu.edu.