Today’s national security environment demands whole-of-government approaches to complex national missions ranging from combating terrorism and trafficking in persons to securing cyberspace. These and many other twenty-first-century security challenges require an agile and integrated response; however, our national security system is organized along functional lines (diplomatic, military, intelligence, law enforcement, etc.) with weak coordinating mechanisms across these functions. Recent reforms in the U.S. government counterterrorism community offer valuable insights into this challenge as well as organizational lessons that can be applied to other complex national security missions. Specifically, the Directorate of Strategic Operational Planning (DSOP) within the National Counterterrorism Center (NCTC) provides an innovative and promising model for a national level interagency team that can support the National Security Staff in strategically managing a priority mission from a whole-of-government perspective.

All too often our national security and foreign policy institutions are slow to learn lessons from their own successes and failures. Lessons are identified and applied to an even lesser extent across different institutions and missions. But when problems and solutions are systemic – due to systems designed for a much different era – the experiences of one discrete organization or community can offer valuable insights to an entirely different set of actors.

One issue that demands particular attention in the contemporary security environment is how best to apply whole-of-government approaches to complex national missions, ranging from combating terrorism and trafficking in persons to securing cyberspace. These and many other twenty-first-century security challenges require an agile and integrated response; however, our national security system is organized along functional lines (diplomatic, military, intelligence, law enforcement, etc…) with weak coordinating mechanisms across these functions. Today, there is no definitive model for integrating capabilities and funding for inher­ently interagency missions.

Recent reforms in the U.S. government counterterrorism community provide a valuable case study on this subject for several reasons. First, the terrorist threat is representative of twenty-first-century national security challenges that are complex, trans-border, and fraught with multiple sets of networked, non-state adversaries. Second, like all multifaceted problems, counterterrorism requires a holistic approach to address; in this case, the law enforcement, financial, diplomatic, military, legal, and other dimensions of the terrorist threat. Third, the tragic events of September 11, 2001 led to the most systemic review and subsequent set of national security reforms thus far in the 21st century.

The creation of the Directorate of Strategic Operational Planning (DSOP) within the National Counterterrorism Center (NCTC) to conduct counterterrorism planning and assessments provides one model for integrating high-priority, high-complexity, multi-agency missions. Interagency teams for other national missions, such as cyber-security, should be seriously considered to support the National Security Staff in strategic management of end-to-end processes (policy, strategy, aligning resources with strategy, planning, execution, and assessment) and to fulfill functions such as:

Certain key enablers must be in place for any interagency team or organization to be fully effective. These include:

The 9/11 Commission found that the counterterrorism mission is in need of “joint planning” and “joint action” to ensure that unity of purpose and unity of effort are achieved. The Commission further recognized that the National Security Council staff, consumed with managing day-to-day crises, was unable to fulfill the functions of strategic planning and oversight and was therefore incapable of effectively managing a whole-of-government approach to counterterrorism on its own. Attempting to rectify these deficiencies, the Commission envisioned the National Counterterrorism Center as fulfilling these roles and “breaking the older mold of national government organization.” 2

In 2004, the Intelligence Reform and Terrorist Prevention Act (IRTPA) established NCTC to serve as the U.S. government’s locus for counterterrorism intelligence and strategic operational planning. Part of the NCTC mandate was “to conduct strategic operational planning for counterterrorism activities, integrating all instruments of national power, including diplomatic, financial, military, intelligence, homeland security, and law enforcement activities within and among agencies.” To accomplish this, the IRTPA established the Directorate of Strategic Operational Planning within NCTC and gave it responsibility for developing interagency strategic operational plans, assigning roles and responsibilities for plans, coordinating interagency operational activities, monitoring implementation of plans, and conducting assessments. 3

In February 2010, the Project on National Security Reform (PNSR) released a report – Towards Integrating Complex Missions: Lessons from the National Counterterrorism Center’s Directorate of Strategic Operational Planning – that studied DSOP in depth and found it to be a promising example of a national-level integrating mechanism for a complex mission such as counterterrorism. 4 The Directorate conducts a broad range of integrating functions including interagency planning, assessment, and resource oversight to help ensure a holistic approach to the mission. Although this fledgling institution continues to face the inherent challenges of operating in an outdated system, the concept it embodies – an interagency mechanism to support the National Security Staff in strategic management of a discrete mission – is worthy of consideration in other contexts.

Imagine, for example, an interagency cyber-security team chartered by the president and reporting to him through the National Security Staff. The team would report to the president, but could be housed in the Department of Homeland Security in the near-term for administrative and other support. 5 It would consist of a permanent cadre of subject matter experts and individuals trained in strategic planning and assessments working alongside detailees from across the government. A cyber-security team could assist senior policy-makers by analyzing policy options, teeing up decisions, and developing planning, resource, and assessment products related to cyber-security. More specifically, an interagency cyber-security team could:

Today, no entity has responsibility for deliberately fulfilling these functions on a whole-of-government basis for the cyber-security mission. Other interagency mission areas have integrating mechanisms in place, but most are not fulfilling these roles. For instance, the National Counter Proliferation Center (NCPC) – also established by the IRTPA – does not have an equivalent to DSOP that looks beyond the intelligence community to conduct planning and assessments with all counter-proliferation stakeholders.

Or consider human trafficking, a twenty-first-century national security concern that has been linked to organized crime, drug trafficking, migrant smuggling, and terrorist financing. Similar to counterterrorism, counter-proliferation, and cyber-security, trafficking is a complex, multifaceted challenge that does not fall under the jurisdiction of any single executive branch organization. The anti-trafficking challenge unites nearly thirty offices in at least seven major U.S. government departments and agencies, as well as numerous intergovernmental and other mission partners. Out of recognition for the need to integrate these diverse capabilities, the President’s Interagency Task Force (PITF) and supporting Senior Policy Operating Group (SPOG) were established as policy-coordinating bodies and a Human Smuggling and Trafficking Center (HSTC) was created to serve as an information clearing house. 7 in strategic planning and assessments for the anti-trafficking mission.

The PNSR study identifies several important lessons from the DSOP experience that are applicable to other mission areas. First, this case study demonstrates the importance of a reporting chain to the president. The director of NCTC reports to the Director of National Intelligence (DNI) for the intelligence aspects of the NCTC mission but reports to the president for DSOP work on whole-of-government planning and assessments. This chain of command and proximity to the president convey an informal authority that is beneficial, if not necessary to lead an effective interagency team.

In addition to a direct link to the president, just as critical is a seamless and institutionalized linkage to the team’s customers in the interagency space – including relevant National Security Staff Directorates, NSC Committees, and OMB staff. These relationships are necessary to stay relevant and add value as organizational arrangements and policy priorities shift within and across administrations.

Moreover, the linkage to Congress is just as critical. The lack of congressional oversight and funding mechanisms that can look holistically at a complex national mission such as counterterrorism or cyber-security will also inhibit the effectiveness of any interagency team. A congressional champion is critical to resource the team and to provide streamlined oversight of the national mission. Furthermore, Congress must resource the participating departments and agencies that are being asked to contribute to a mission that may not be a core part of their mandate.

The State Department’s Office of the Coordinator for Reconstruction and Stabilization (S/CRS) 8 is an example of the “lead agency” approach to integration. S/CRS was established in 2004 to support the secretary of state in leading and coordinating U.S. government reconstruction and stabilization efforts. The office has made progress integrating U.S. government capabilities to prepare, plan for, and conduct stabilization and reconstruction activities, but these efforts have been hindered as a result of S/CRS being buried within the State Department and without strong and consistent congressional support. 9

In addition to the informal authority brought about by proximity to the president, the relevancy derived from an institutionalized relationship with the National Security Staff, and the formal authority derived from a champion on the Hill, other systemic impediments will plague any future interagency team just as they have plagued DSOP. For any complex, multi-agency mission such as counterterrorism or cyber-security, untangling overlapping mandates and authorities to ensure that all actors understand the need for the existence of, and leadership from, an interagency team is necessary for the team to achieve its full potential.

Any planning cell – including DSOP and S/CRS – will suffer from a lack of civilian planning and assessment capacity resident throughout the U.S. government. Until a government-wide human capital system is established to provide personnel with the necessary experience, expertise, and incentive, an interagency team will struggle to find sufficient numbers of individuals with the right skill sets. Beyond trained individuals, entire departments must be prepared to provide planning and reach-back support to personnel deployed to the field or to an interagency team in Washington. 10

Complex national missions such as cyber-security, reconstruction and stabilization, and anti-trafficking in persons demand an integrated approach. Formal integrating mechanisms are needed to support an overburdened and understaffed National Security Staff. The experience of the Directorate of Strategic Operational Planning within the National Counterterrorism Center offers many valuable lessons for future interagency teams and provides insights into the challenges associated with operating in an outdated system. Before true integration can be achieved, the overall national security system must be modernized and recalibrated to put national missions ahead of parochial interests. Absent holistic reform, however, much can be done to improve on existing approaches and bolster mechanisms that enable the United States to bring all its capabilities to bear in the twenty-first-century security environment.

Daniel Langberg is a founding member of the Project on National Security Reform (PNSR) – a comprehensive effort to improve the U.S. government’s ability to meet the strategic challenges of the twenty-first-century. He currently serves as deputy director for interagency teams and planning and was recently the deputy director of the first-ever comprehensive study of the National Counterterrorism Center’s Directorate of Strategic Operational Planning. Mr. Langberg is also an analyst at the Institute for Defense Analyses where he conducts research on a variety of issues related to complex contingencies and interagency affairs. He may be reached at dlangberg@pnsr.org. 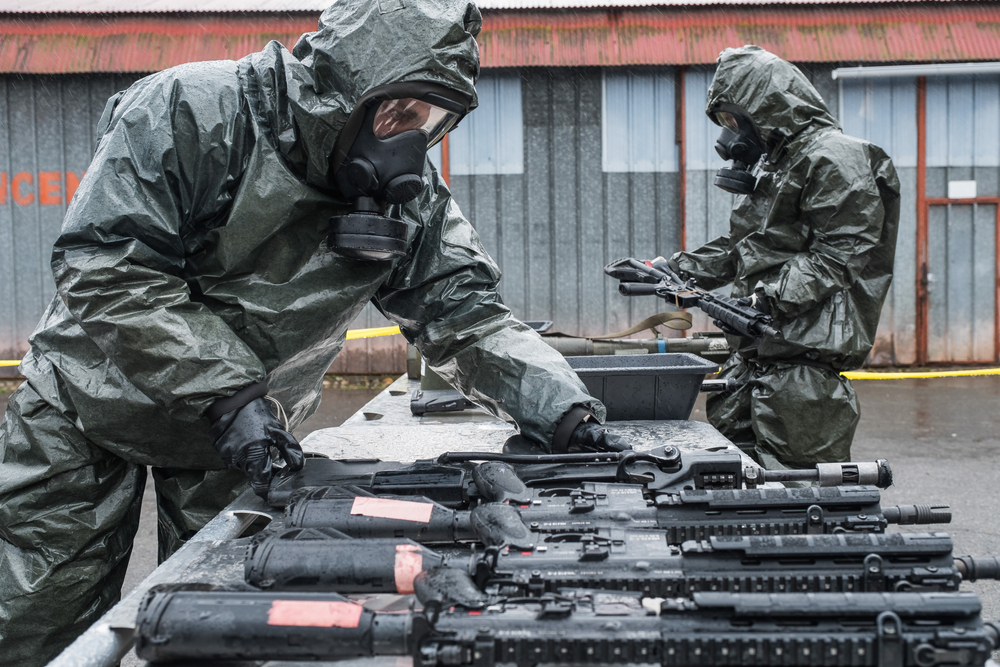